Adama, Football, and the Institutional Environment

Between a busy couple weeks and a desire to catch up on Mad Men, I'm running out of time in the window I had set aside tonight to bring my blog up to date. (By the way, if you want to stay up to date on this blog but with minimal effort, there's now a box at bottom to subscribe to future updates by e-mail).

Last Sunday, it was the outbound leg of another work trip that cut into my blogging time. The destination was Adama, a city 100k southeast of Addis that--startlingly in a country of 90 million people--is the country's third largest city with a population of only 250,000. A population that's 80% rural will tend to do that. (I should also note that all of these numbers are approximate at best.)

A few other interesting facts about Adama:

There's not too much to recount from the three days I spent in Adama -- much of it was passed in Amharic-language meetings. Two recollections deserve mention, however, and both come from the Sunday afternoon we first arrived in town. One involves football (soccer) and the other a conversation with a colleague.

We arrived around 4:30 PM and just as the first half of an Ethiopia-South Africa world cup qualifying draw was ending. An Ethiopia win would clinch the qualifying group and send the team through to the final round--a home and home series against a yet-to-be-determined opponent. A loss would put South Africa in the group lead, in prime position to deny Ethiopia advancement with only one game left.

Running may be the de facto national sport of Ethiopia, but with the stakes this high (Ethiopia had never advanced to a World Cup or even been this close), the nation was riveted. We'd been listening by radio in the car as South Africa got off to a dominating start and a 1-0 lead. But as we contracted our rooms for the night ($20/night for a pleasant, clean room with good light and satellite TV), Ethiopia equalized on the black-and-white TV in the lobby, scoring on a well-placed shot off a solid cross.

I spent the next hour in the bar, behind an intent mass of Ethiopians, watching Ethiopia take the lead on a devastating own goal for South Africa, and then hold on through the final minutes. The group in the bar erupted, though it was no match for the frenetic joy in the scenes from the stadium in Addis where the match was played. (Some friends tried and failed to get tickets--they went on sale at noon on match day, went for as low as 50 cents, and the only reliable way to procure them was to wait on line for several hours).

Walking around later, it was clear the whole city shared in expressing the celebratory spirit, to the extent that one of my colleagues commented that he wasn't sure people were aware that this had clinched only advancement to the next qualifying round, and not the World Cup birth itself. Much of the enthusiasm consisted of crowds of young men blocking the street to slow passing vehicles--allowing them to climb aboard and ride along the tops and sides. I didn't bring a camera to Adama, but the below scene of similar merry-making comes from a friend in Addis: 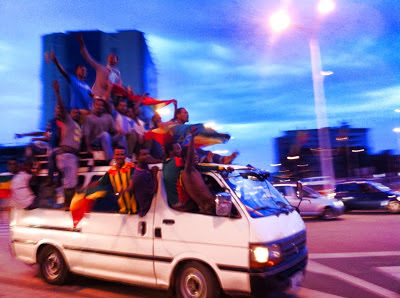 (Credit for this photo goes to Hayoung)

Unfortunately--with apologies to anyone who already knew this and has nonetheless been waiting this long for me to reveal it--it emerged the next day that Ethiopia had, in their prior match, played an ineligible player. They were forced to forfeit 3 of their points and their lead over South Africa is no longer unassailable. Still, a win in the next game--which comes in September and in which Ethiopia will face a weaker opponent--will propel Ethiopia through and provide reason for another such celebration.

My guide for this walk around the city was an Ethiopian coworker, a senior agronomist, who seemed somewhat bemused by the level of excitement. The second notable takeaway from the day were was his backstory as it came out of over the course of our walk. While I won't presume to tell it in full here, some interesting fragments include:
I'm not doing this conversation justice--and perhaps can't without giving a more in-depth recounting than I'd like.

To me, the common thread among my takeaways is the extent to which the fundamental institutional environment of this country has seen staggering change (geopolitical realignment, stability, etc.) within the timeframe of a lifetime rather than a historical epoc. Though there do appear to be continuities as well, the scale of the change marks it in contrast to recent US history. (I'd also note that, as a young person, I still have a sense of permanence around the set of things and circumstances I've been acclimated too, which may lead me to underestimate the degree of intra-lifetime--vs. historical-scale--change that is "normal" in today's world.)

To back off on the jargon, the current conventional wisdom on Africa holds that, while there's a long way to go, things are moving fast here in a way that few would've imagined a decade ago and many still don't realize. If I wanted to be a good blogger and tie everything in this overlong post neatly together, I could claim that Adama, Ethiopian football, and my conversation takeaways all--in one way or another--provide another grain of evidence for this view.
Posted by MJK