I made my first trip out of Addis this past Monday. It was a work trip, and my most recent work trip before this was to Topeka, Kansas, so this was a little different.

I went along with a local ATA analyst to attend a "lessons learned" workshop the next day in Awassa, a regional capital 300 km south of Addis, in the Great Rift Valley, that's known for its picturesque lake and its large university. I got lucky and we largely took the "scenic route" from Addis -- a two-car wide strip of Asphalt through recently-planted fields (many of them growing maize!) and shrubby hills that can be faster than the congested "main road," which we picked up toward the end and which goes through village after village. In our time on both roads we occasionally had to slow for herds of cows and goats.

Awassa is apparently a weekend destination for Addis's middle class. We found a new, rectangular hotel near the lake, outfitted with Chinese-made modcons (the TV remote, for instance, had no English or Amharic in evidence). A brief evening walk along the lake shore -- past shacks offering pool tables and fish fries which were largely deserted on a Monday -- led to the picture below.

The next day's workshop was entirely in Amharic (which is the main official language of Ethiopia, although English is apparently a standard part of the curriculum and is the language of big business). Beyond getting to introduce myself -- Ene Max Kornblith ebalalau. Ke ATA nau yehmeh tahut ("I am Max Kornblith. I come from ATA.") -- I was fairly useless. Most of the other attendees were managers of farmers cooperative unions, and the project being discussed--which is a major one for my team--is something you can read more about here via the Huffington Post.

The trip back was uneventful -- i.e. I slept most of the 4-hour drive. Overall, I'd say it was a successful trip. 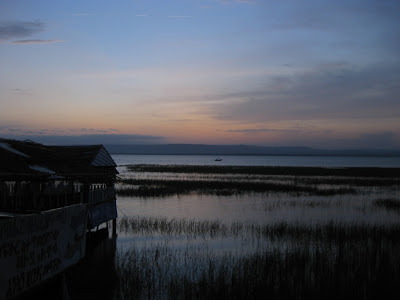 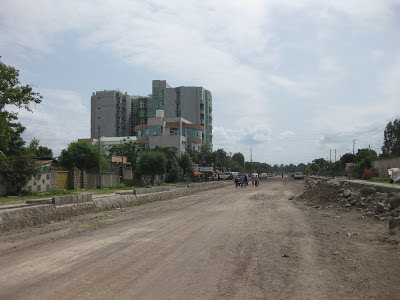 I was with you in Topeka. Are you saying that Ethiopia is EVEN MORE exciting?!?

Brad, I'll admit to you that I have yet to have as nice a burger in Ethiopia as we had in Topeka. Although in my new industry there is at least as much interest in weather forecasting as there was on that trip.