This past November, for two consecutive weekends, I flew northeast of Addis. The first weekend was to Harrar, an ancient, walled Muslim city known for its coffee and chat. The second weekend was to Djibouti, the world's hottest and funniest named country.

Below are some photos from these weekends.

The inside of Harrar's walled city can be claustrophobic and difficult to capture. Most of the point of visiting is to soak in the atmosphere rather than any specific sites. We started our guided visit (there's no other easy way to find your way around) in a bustling marketplace: 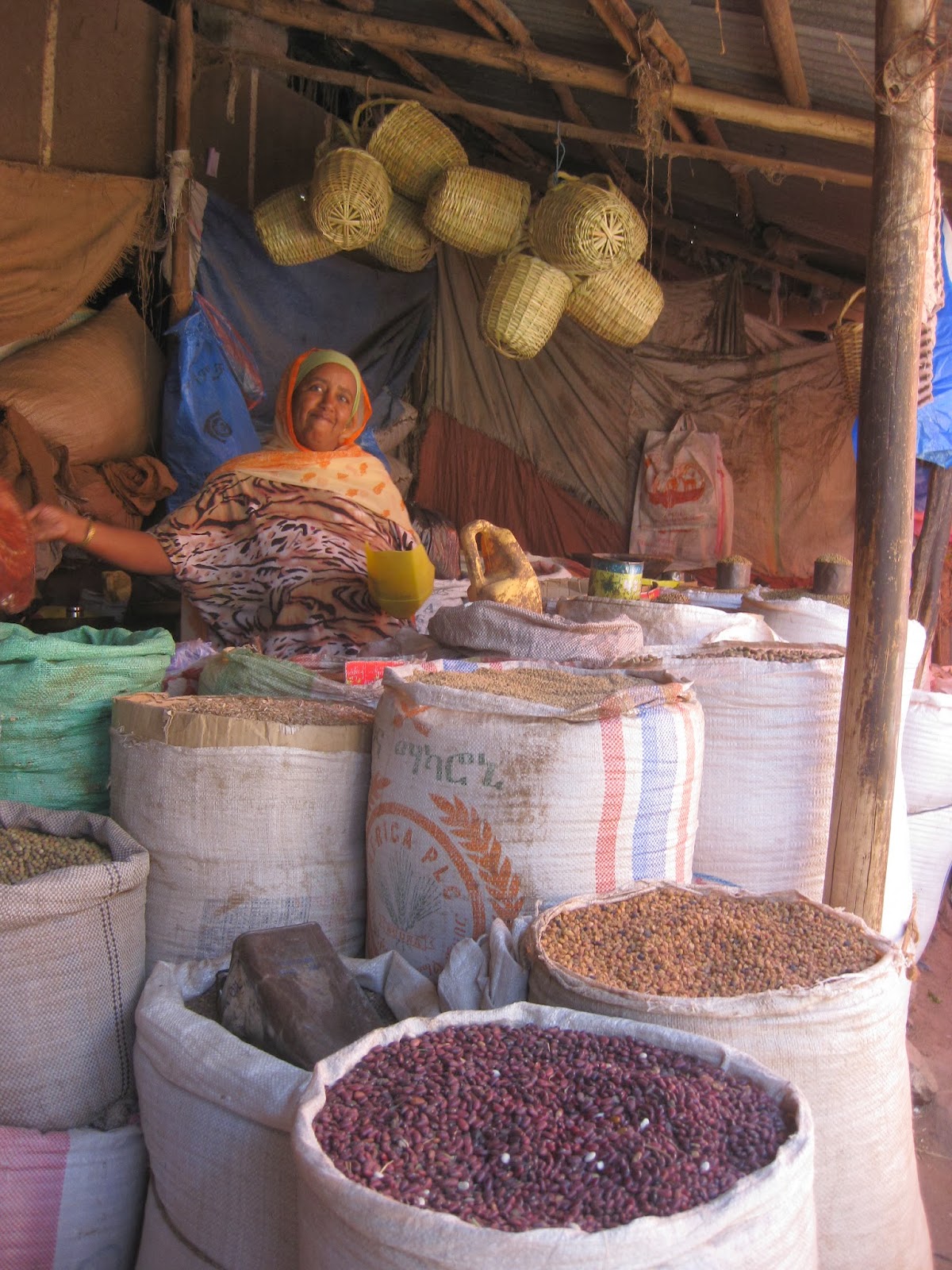 The French poet Rimbaud spent a decade as a trader in Harrer, after he hung up his poetry gloves. He probably didn't live in this house, but it is nonetheless presented as "Rimbaud's house": 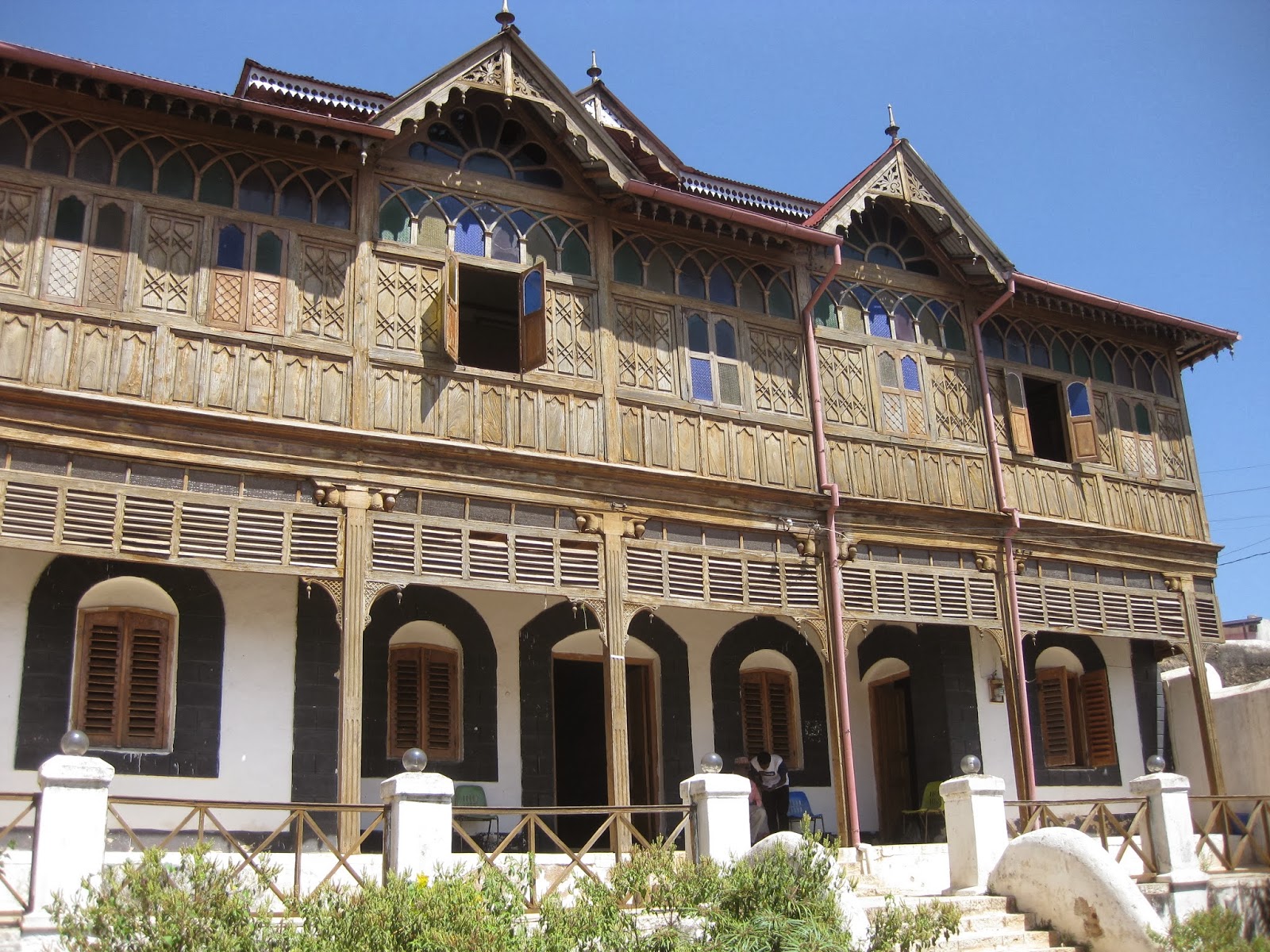 It was a hot day, perfect for a nice cold Coke: 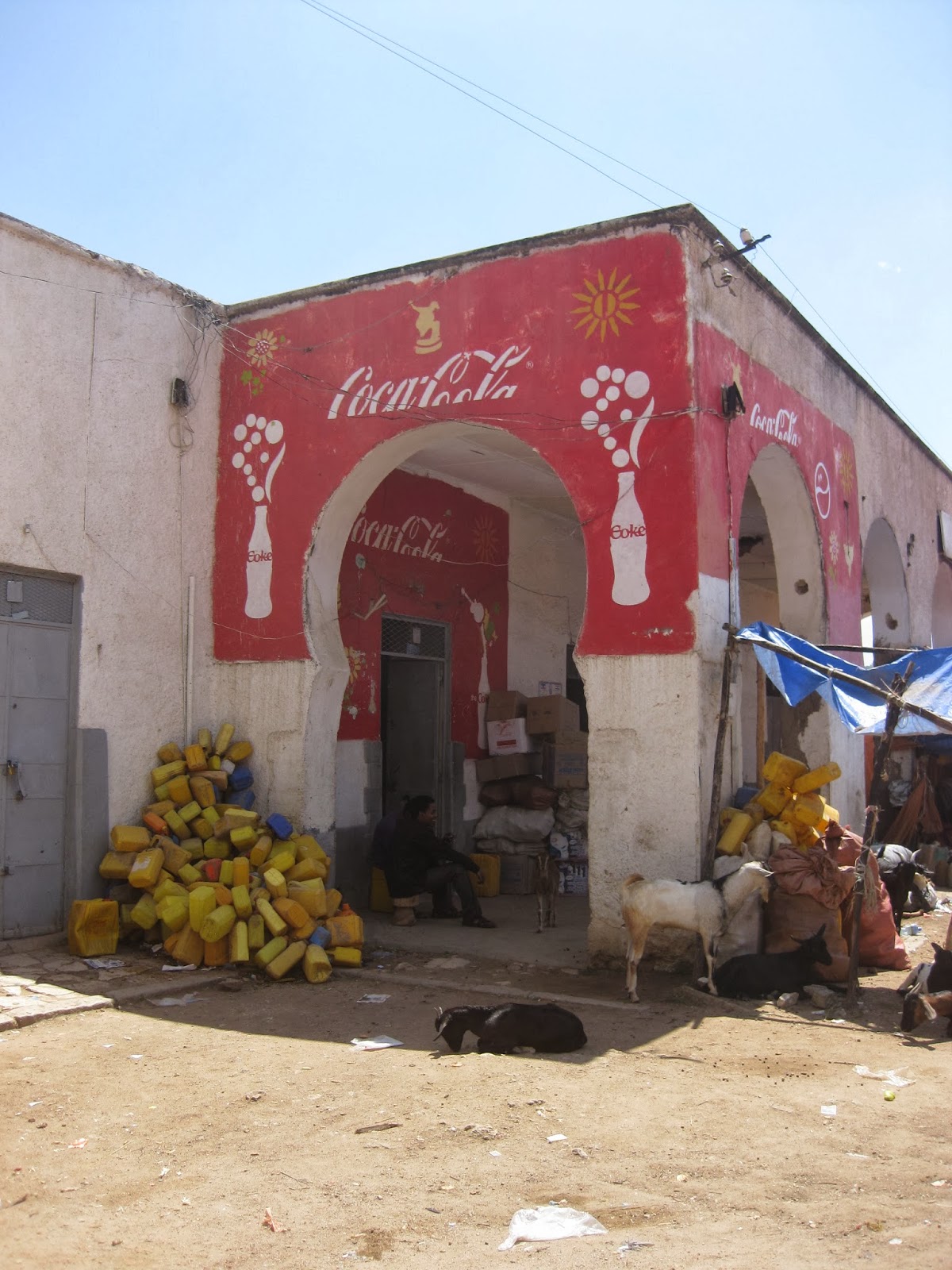 Or for feeding birds of prey by throwing morsels of raw meat into the air: 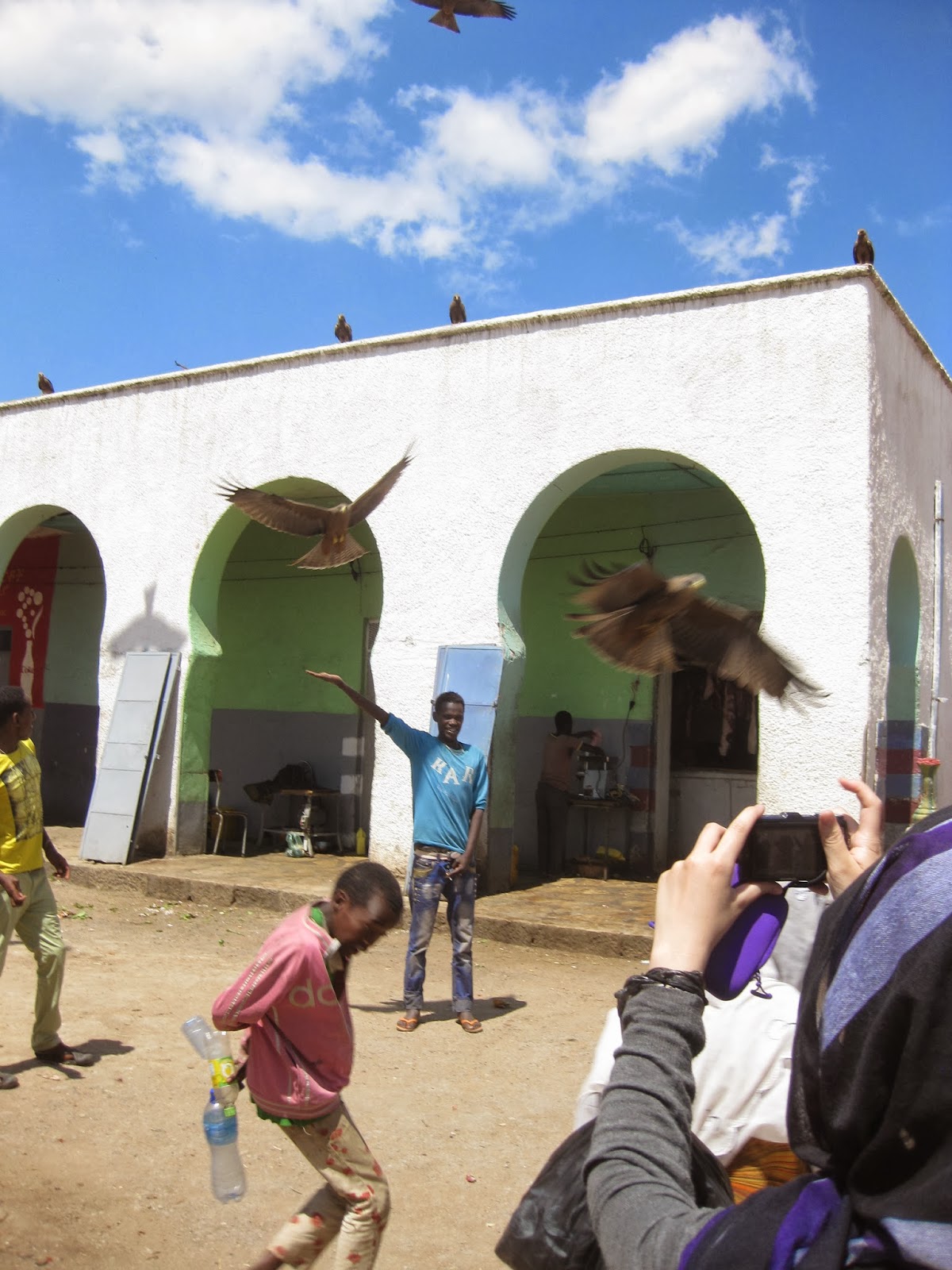 We also saw this donkey passing through: 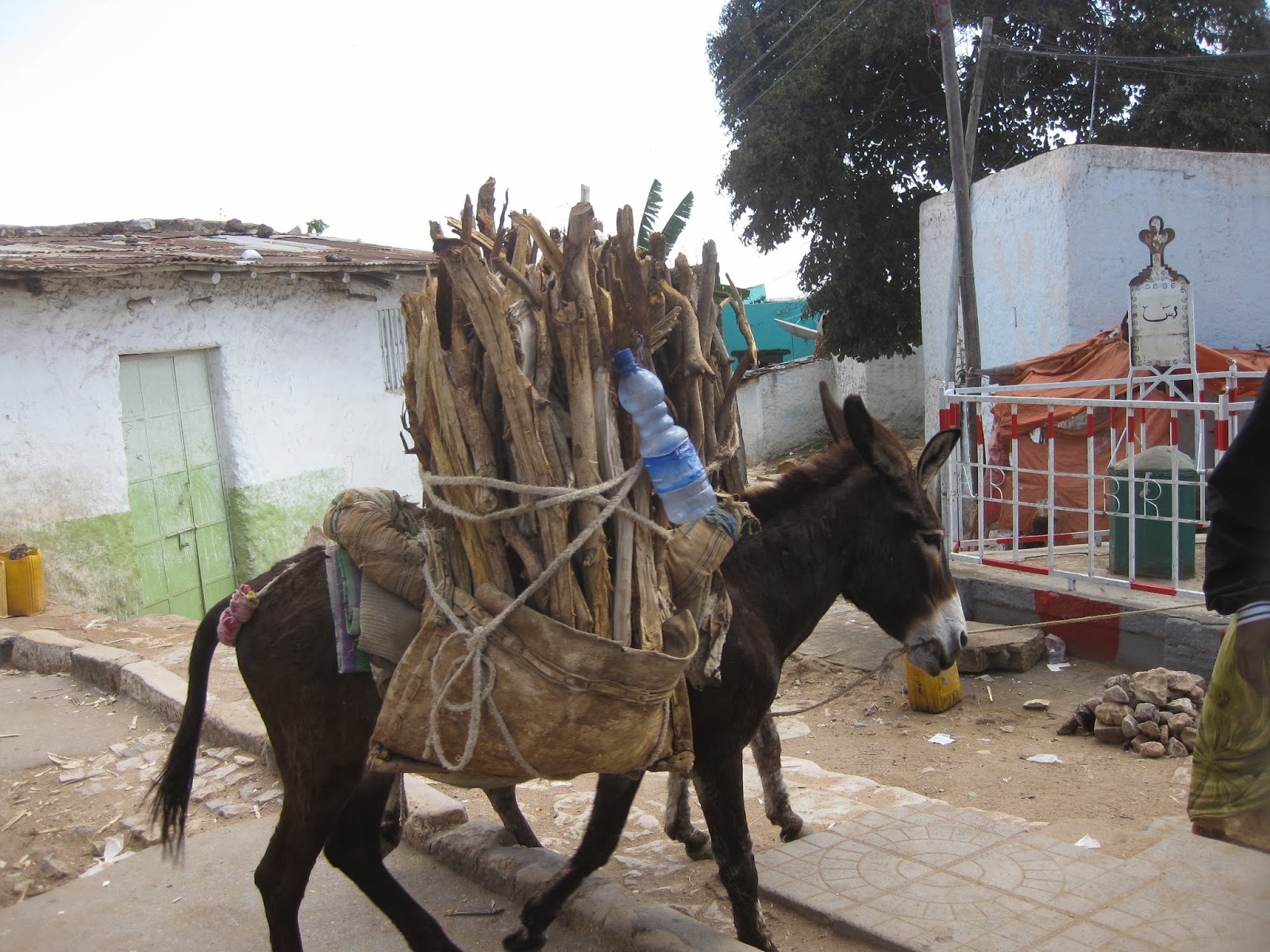 One of the tourist to-do's in Harrar is getting a photo of yourself feeding semi-tamed hyenas. The hyena whisperer in the background of this picture basically summons the pack and sets up waiting tourists (there were about two dozen of us) to feed them raw meat. Two feeding options are from a stick held between the teeth (pictured) or he can dangle it above your head while the hyena climbs onto your back: 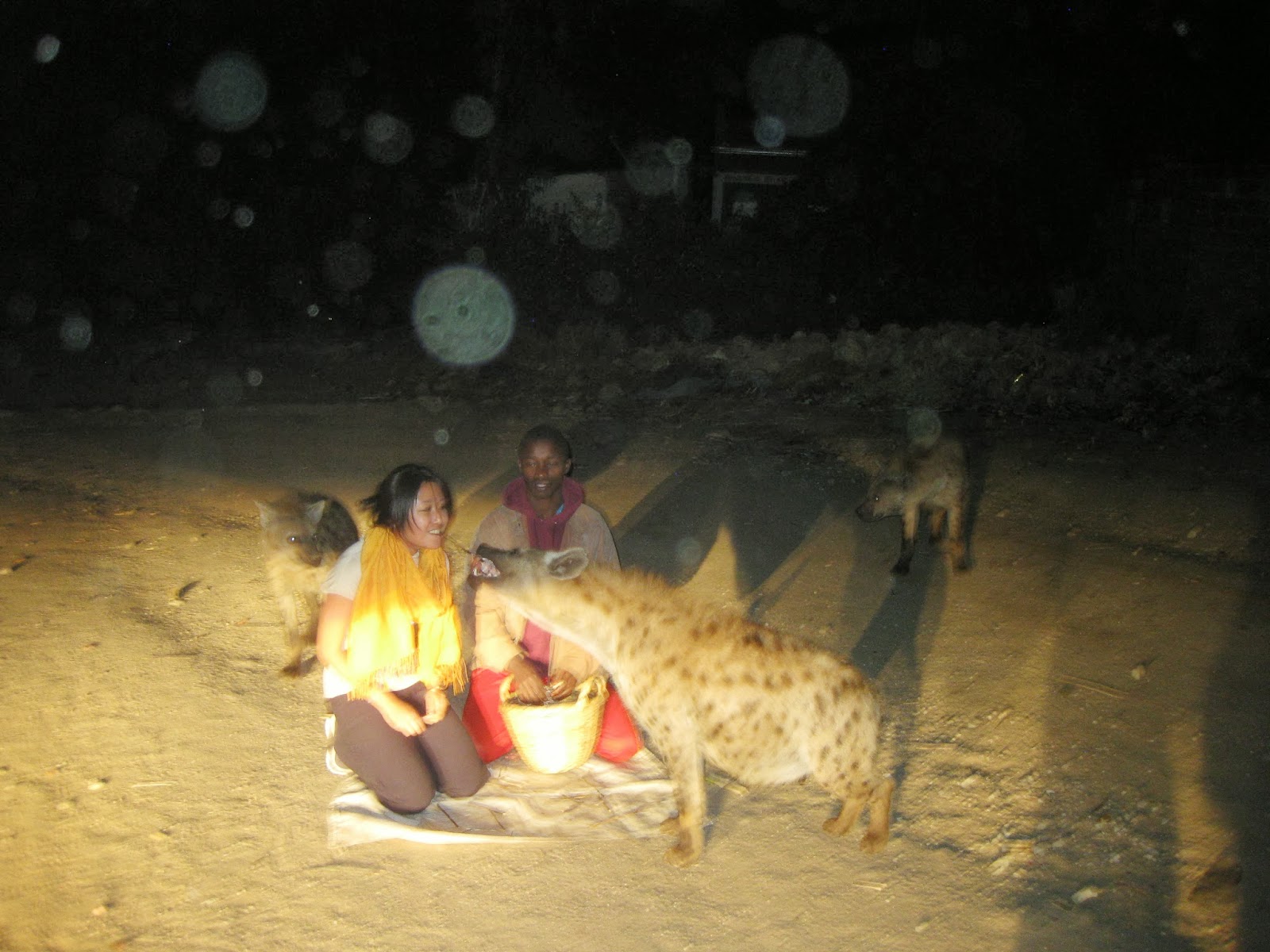 To visit Harrar we flew into and out of Dire Dawa, possibly Ethiopia's second largest city. On our way back through Dire Dawa, we thought we might be able to pay a visit to the city's camel market, but when we went by there was only a single camel to be found. As a sidenote, a quality camel goes for several hundred USD: 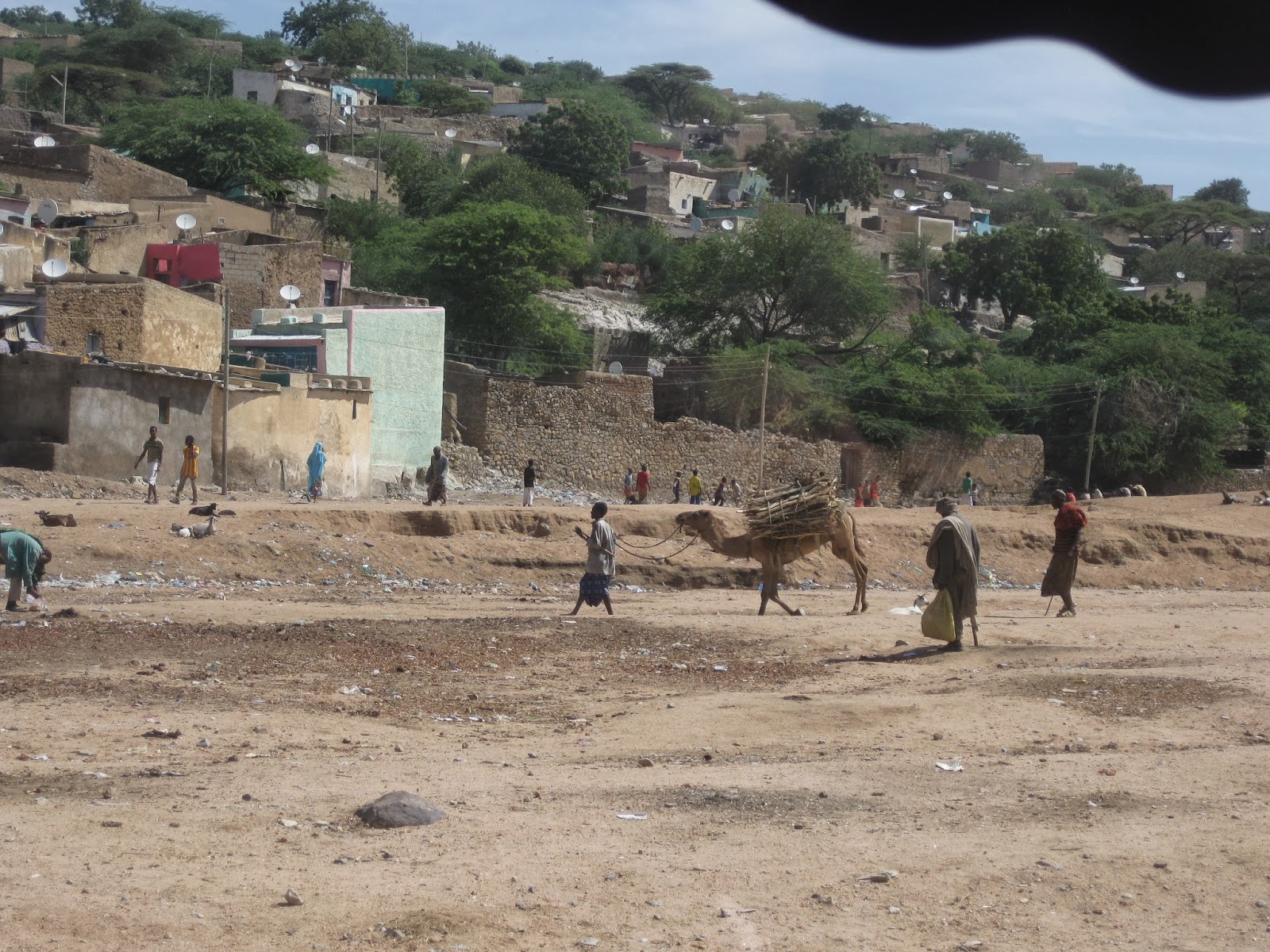 Djibouti is apparently one of the 25 least-touristed countries in the world. Foreigners who pass through the country are likely to be either African emigrants in transit to the Middle East or members of western militaries (France--the former colonial power--has a base, but the US now has a bigger one).

I didn't really know this until after I visited, since I'd heard positive things on the Djibouti-front from at least a few colleagues and acquaintances in Addis.

One of the "things to do"--at least in the November-January migration season--is to snorkel with whale sharks. Whale sharks are actually sharks, but are also filter feeders. They're not supposed to be too dangerous, unless you jump right on top of one--which is basically what I did thanks to the less-than-expert guidance of our snorkel guide / random-guy-with-a-boat: The other place to see in Djibouti is the desert. Basically we booked a two-day desert safari and headed off into the unknown: 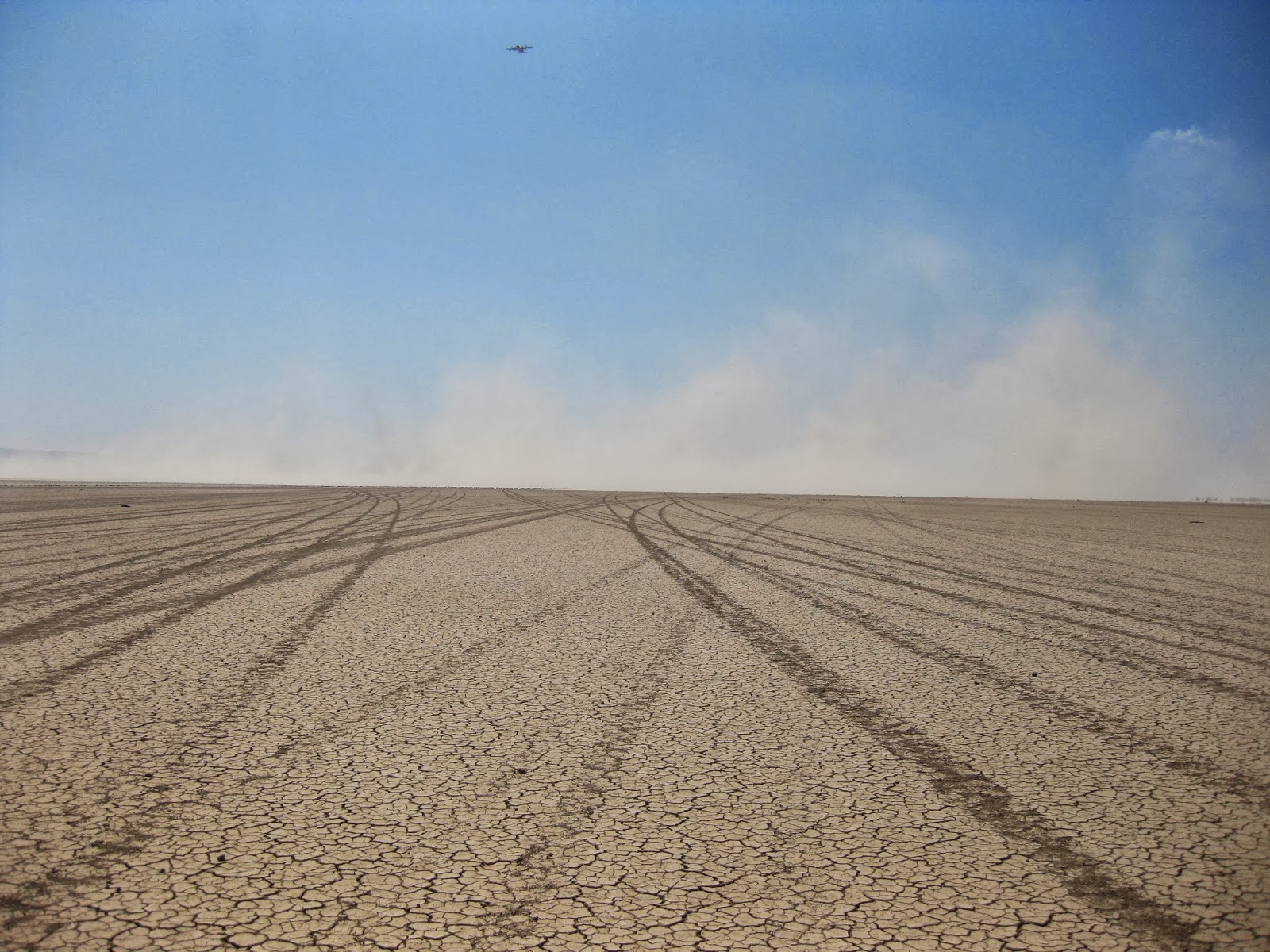 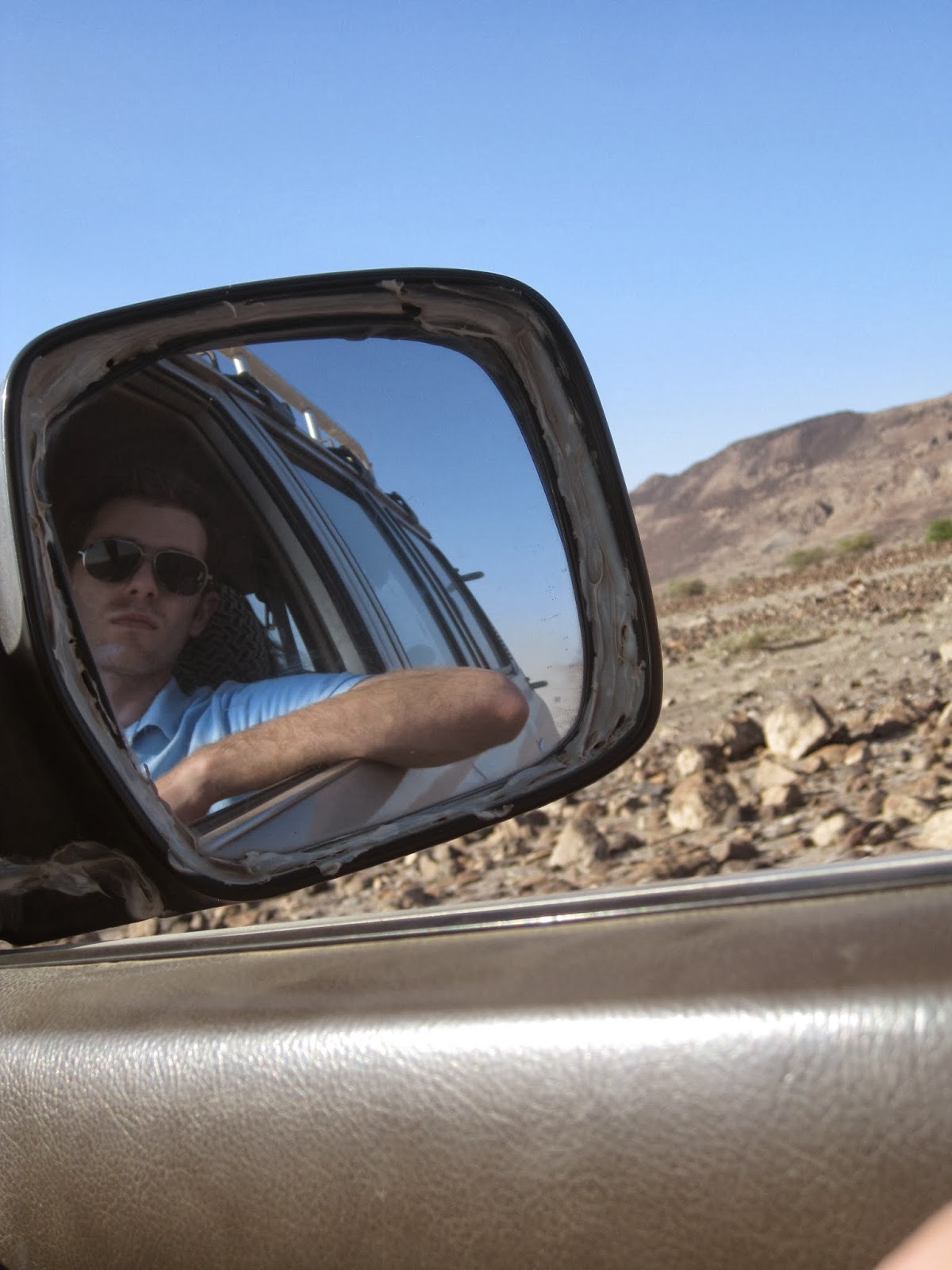 The towns we passed on the way were sweltering and dispirited. Although we did stop for some excellent roadside sandwiches. (I have to say that the French culinary influence on Djibouti seems to have been very positive. Not pictured is our going away stop at the French supermarket in Djibouti city to stock up on cheese, chocolate, and a Thanksgiving turkey.) Anyway, yes, desolate towns: 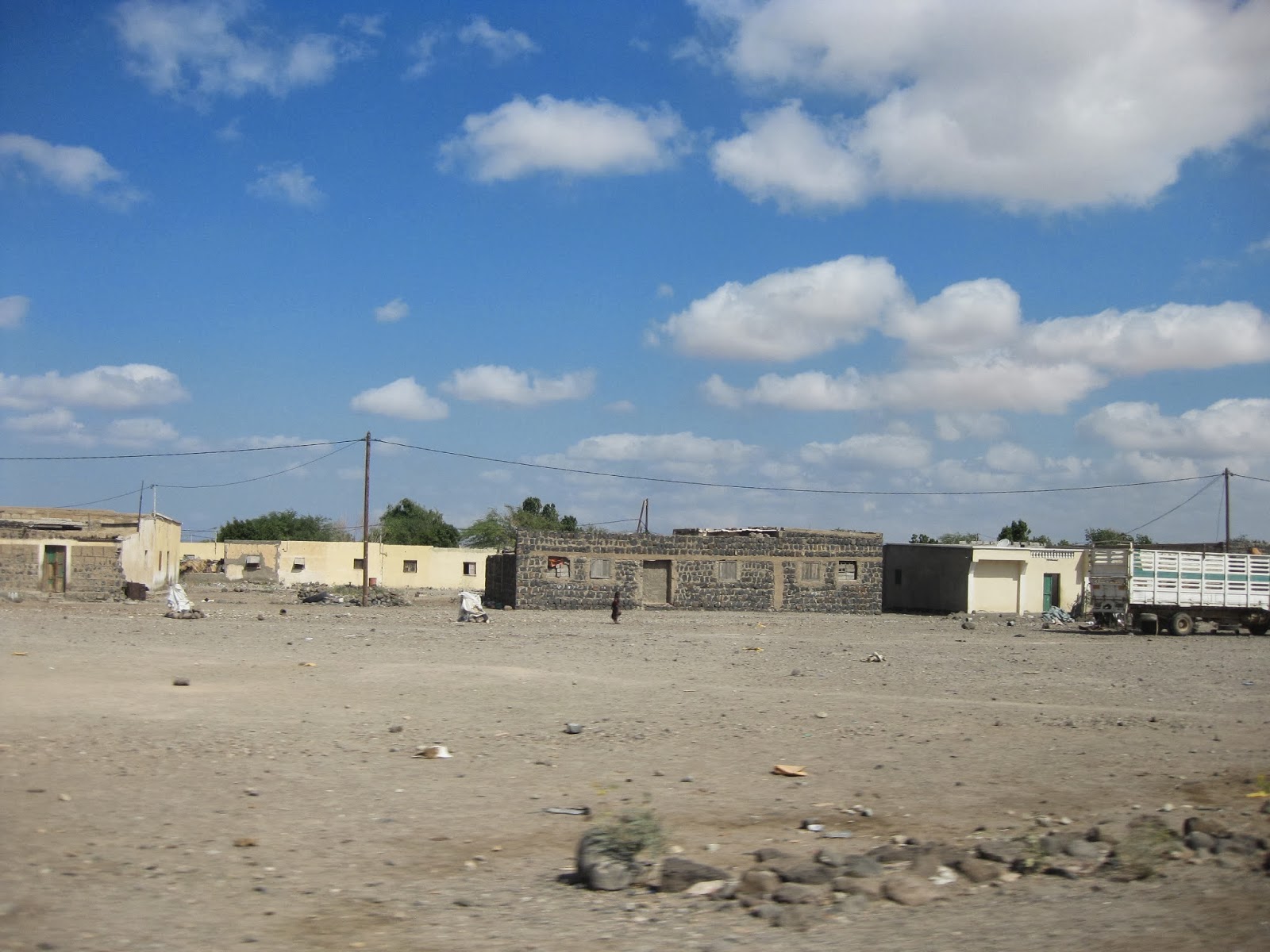 The destination for our overnight was Lac Abbe, which sits on the Djibouti-Ethiopia border and is known for its landscape of rock chimneys. The tour guides will tell you, apocryphally, that Planet of the Apes was filmed here: 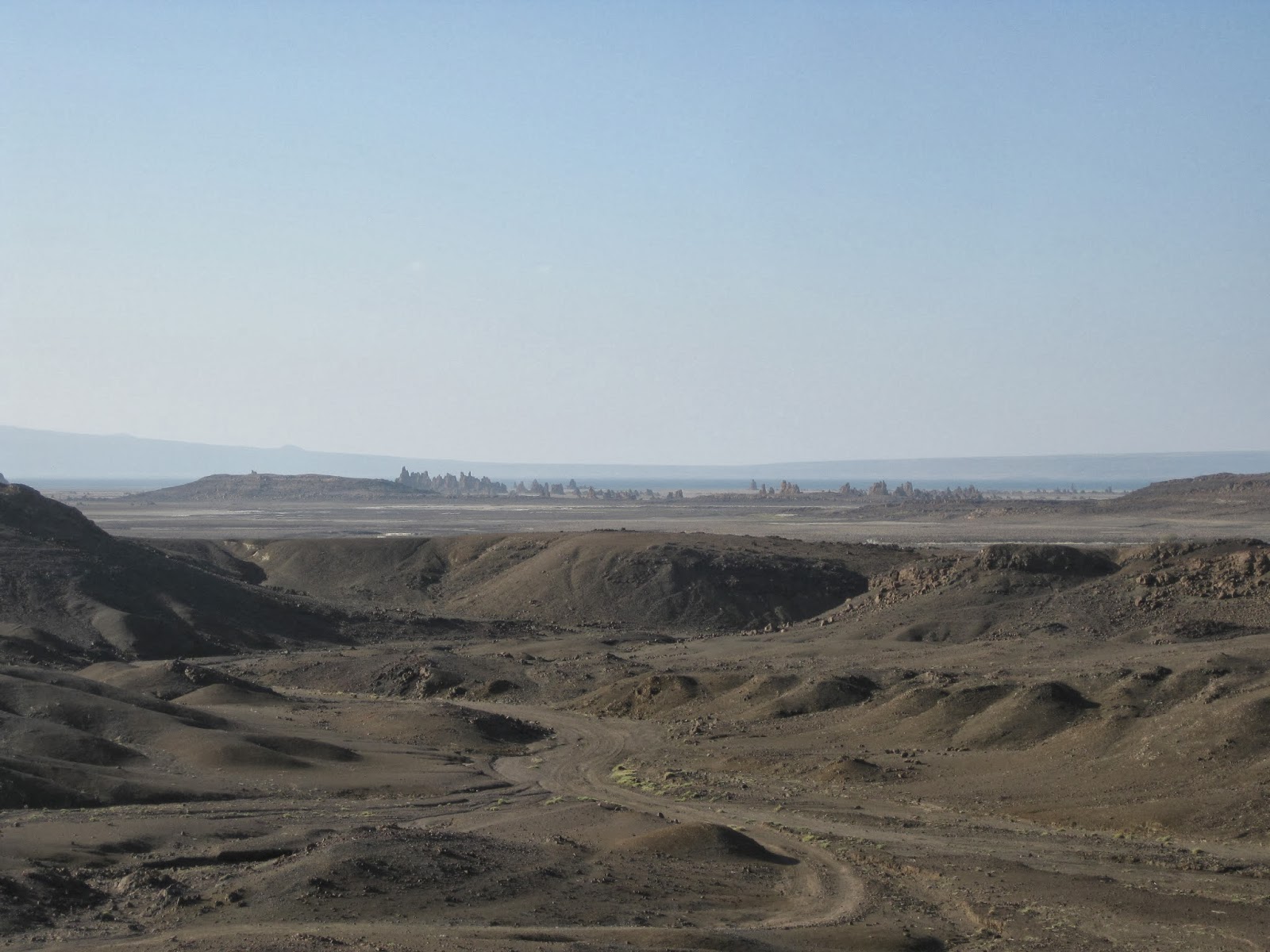 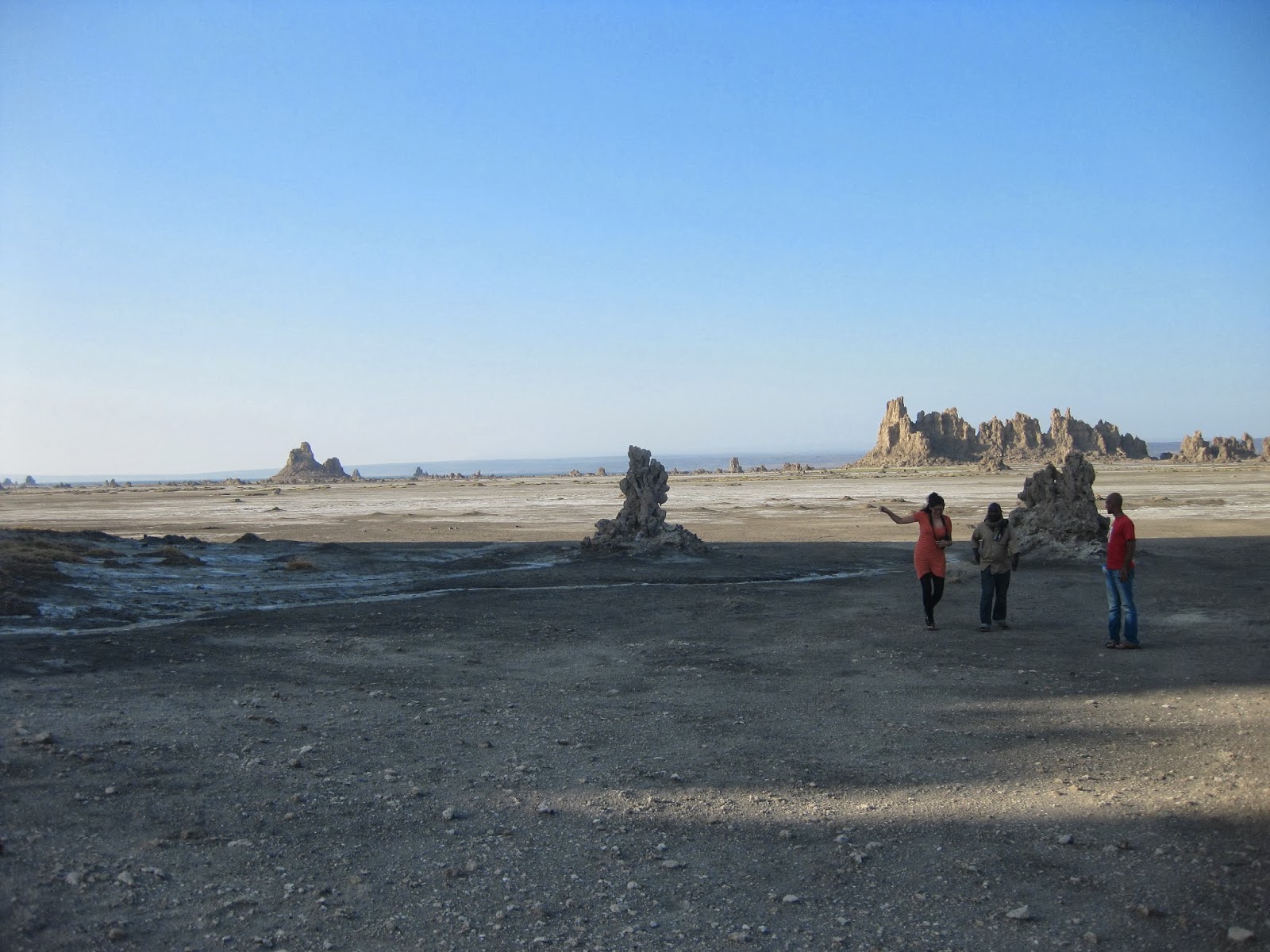 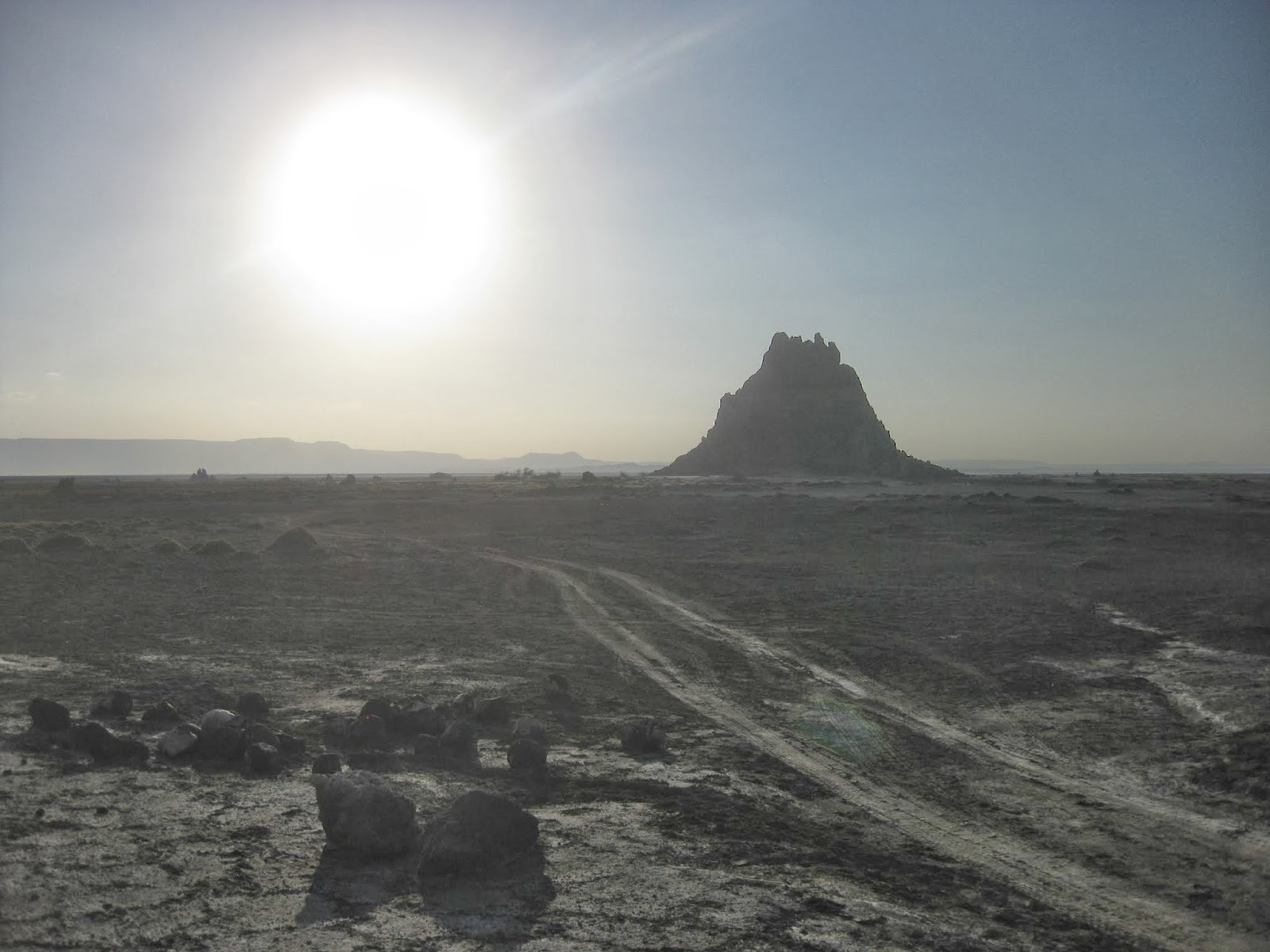 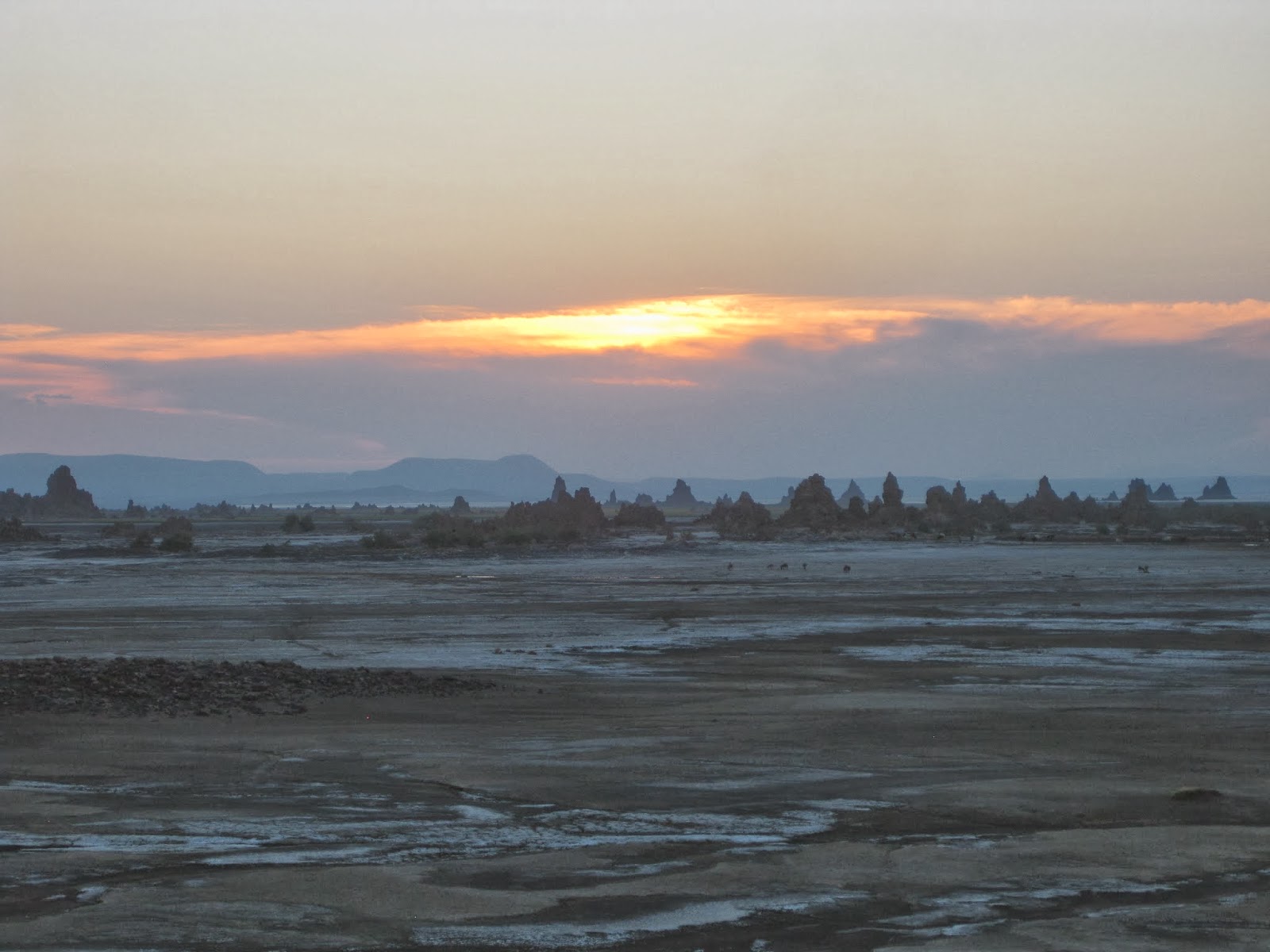 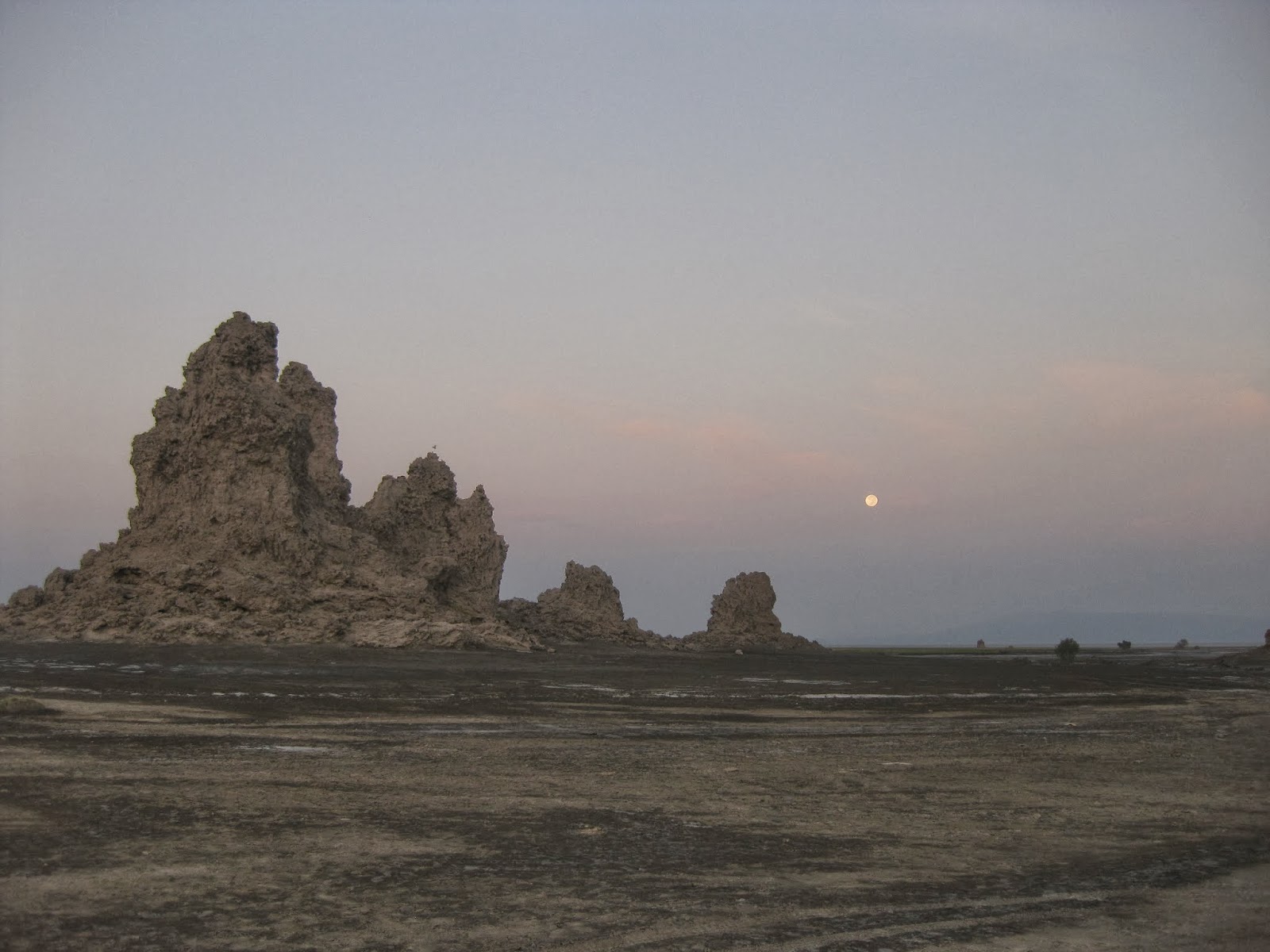 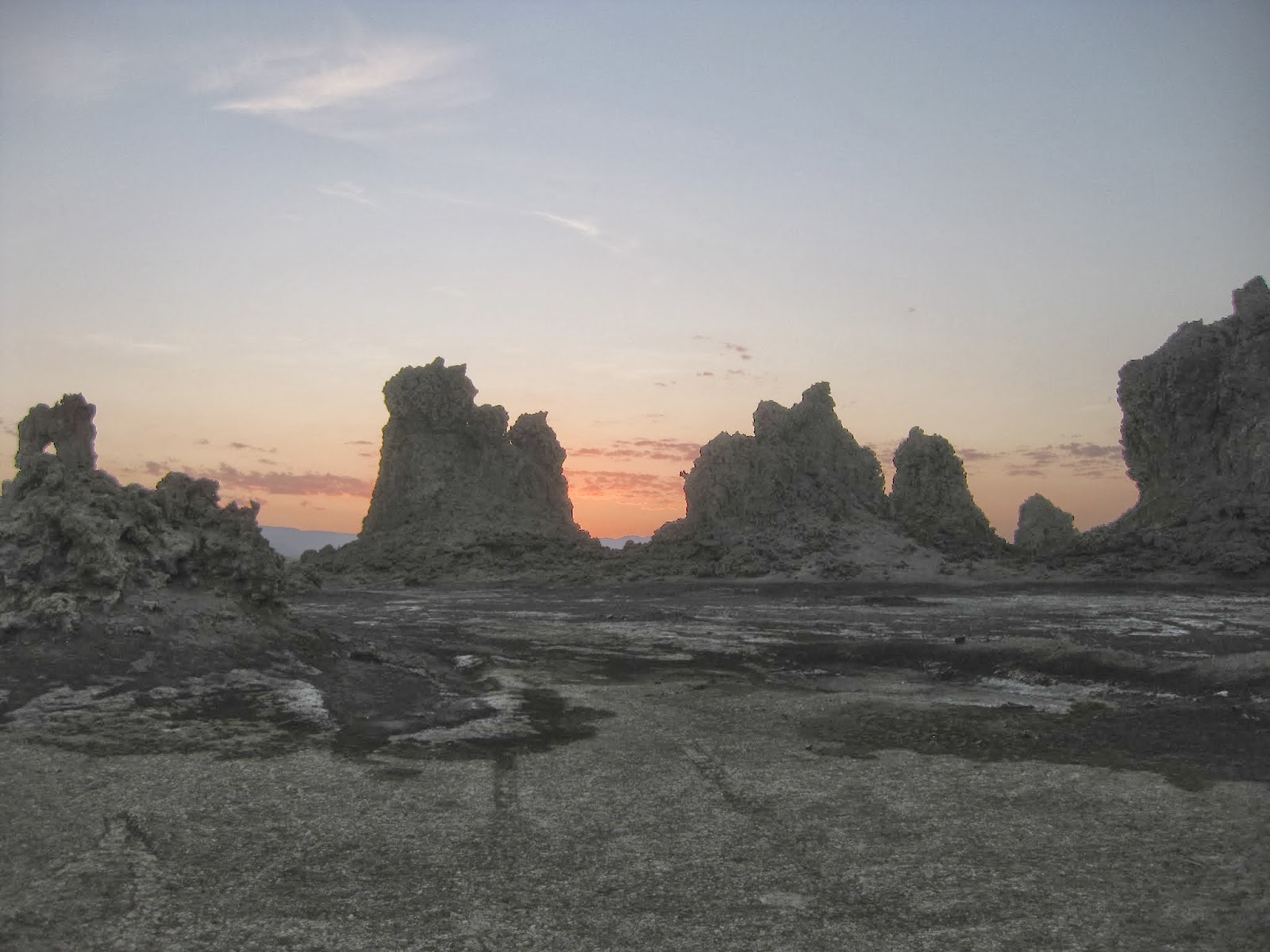 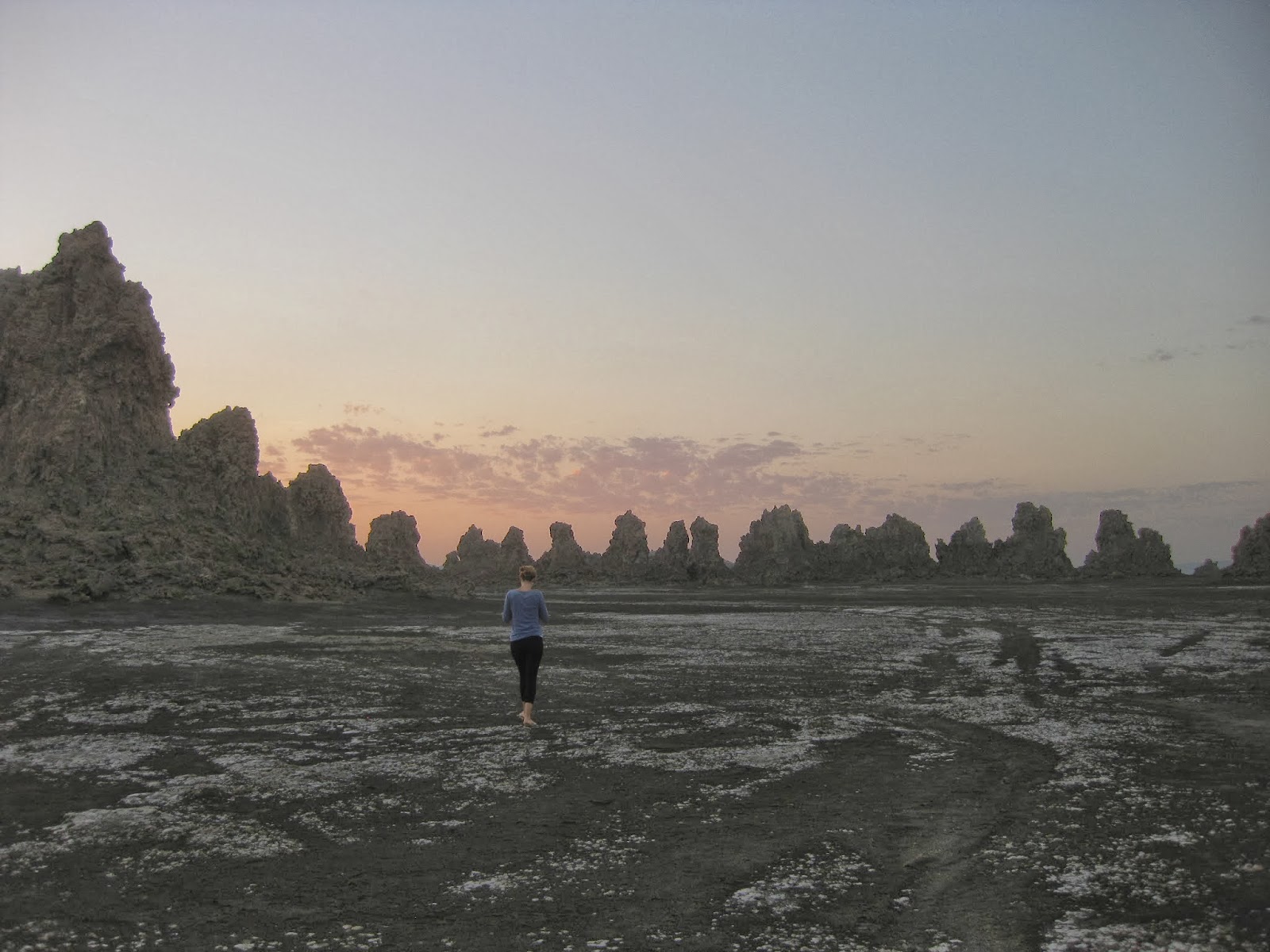 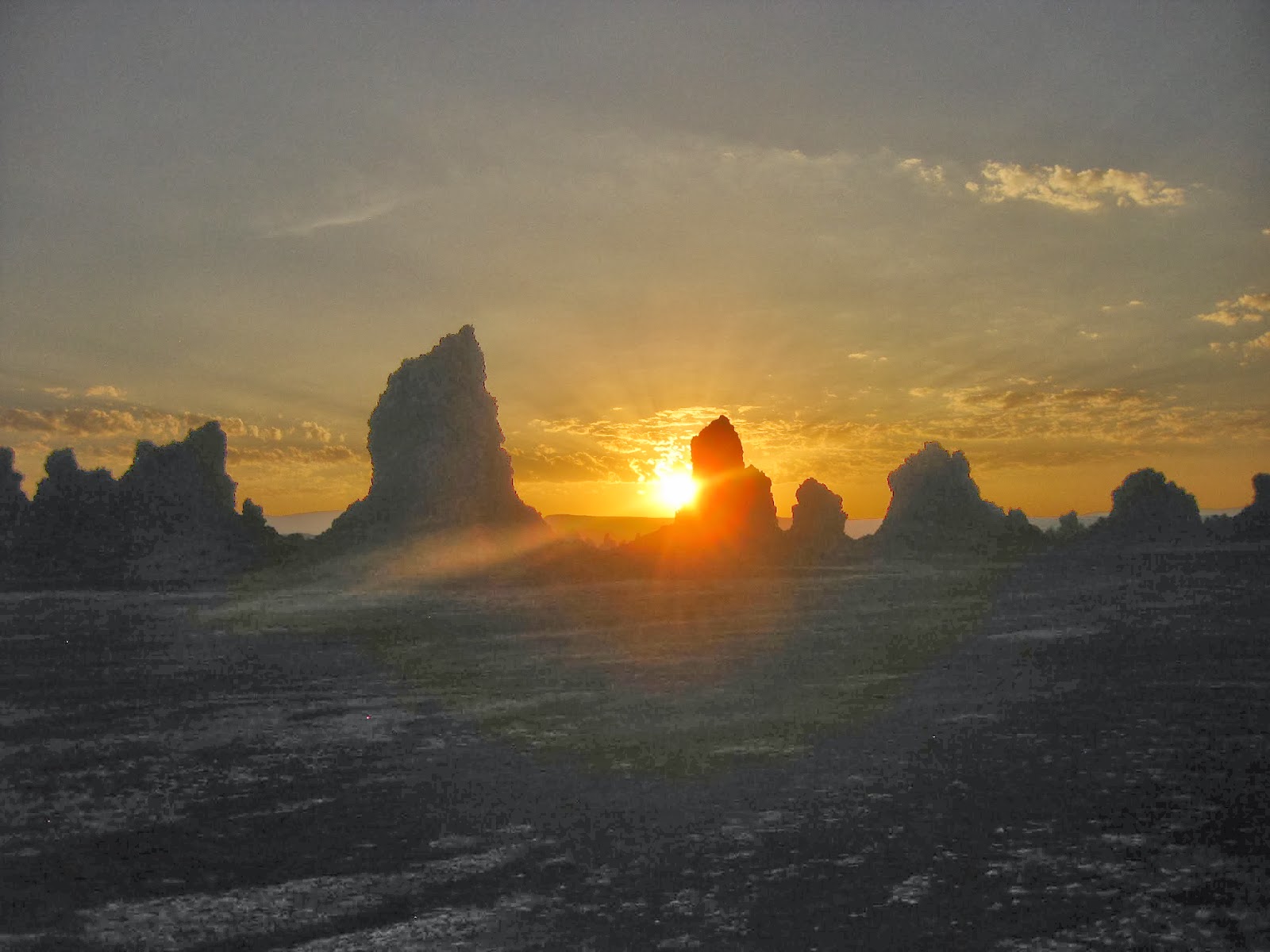 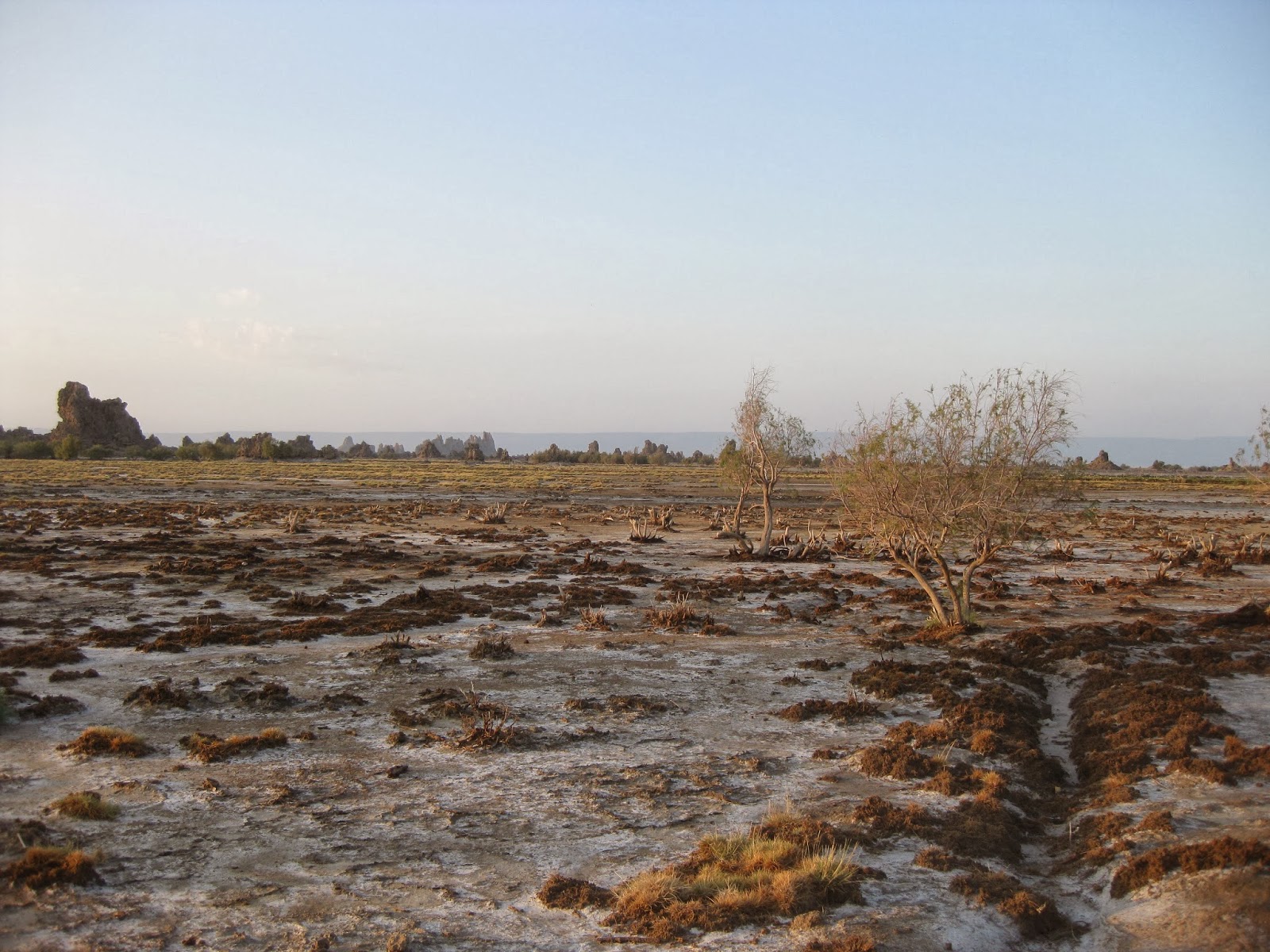 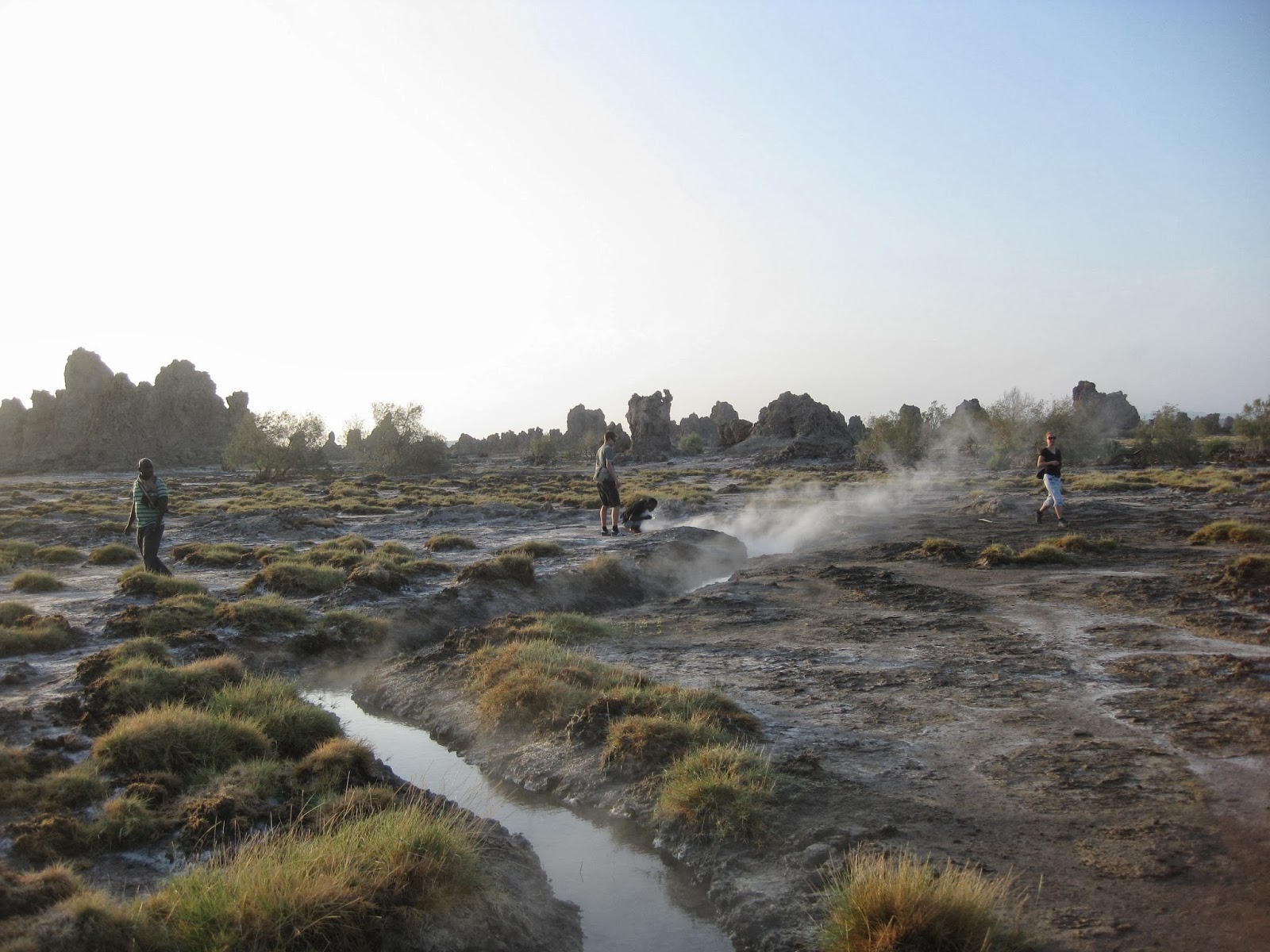 The other major destination on our tour was another lake, Lac Assal. Lac Assal is the lowest point in Africa, and is also saltier than the dead sea. One member of our party picked up a salt-encrusted gazelle skull as a memento: 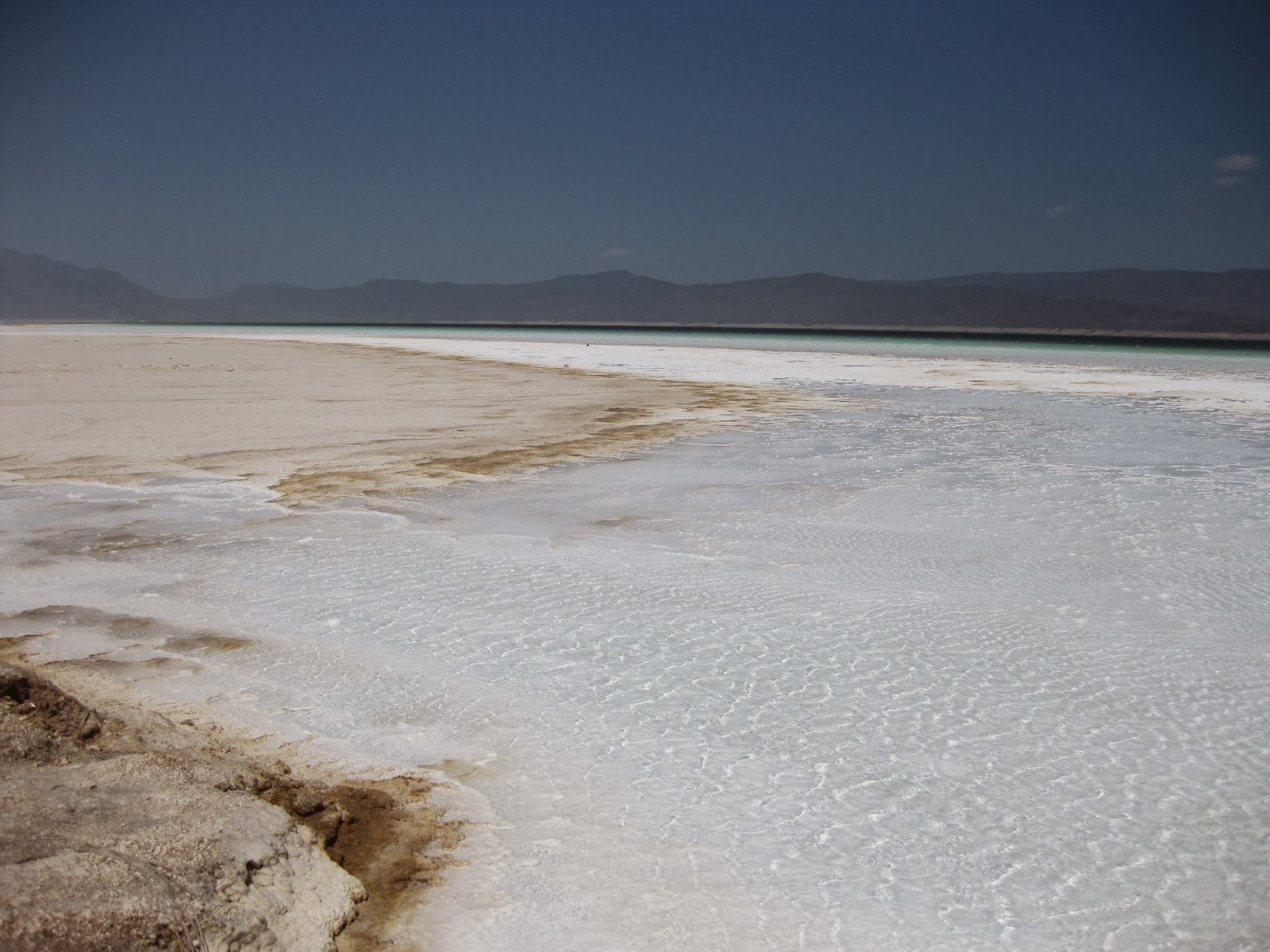 While we were barreling through the extraordinary landscape of Djibouti, I couldn't help but think it'd make a great car commercial, for one of those SUVs meant to take a regular suburban families and carry them all the way to the end of the Earth: 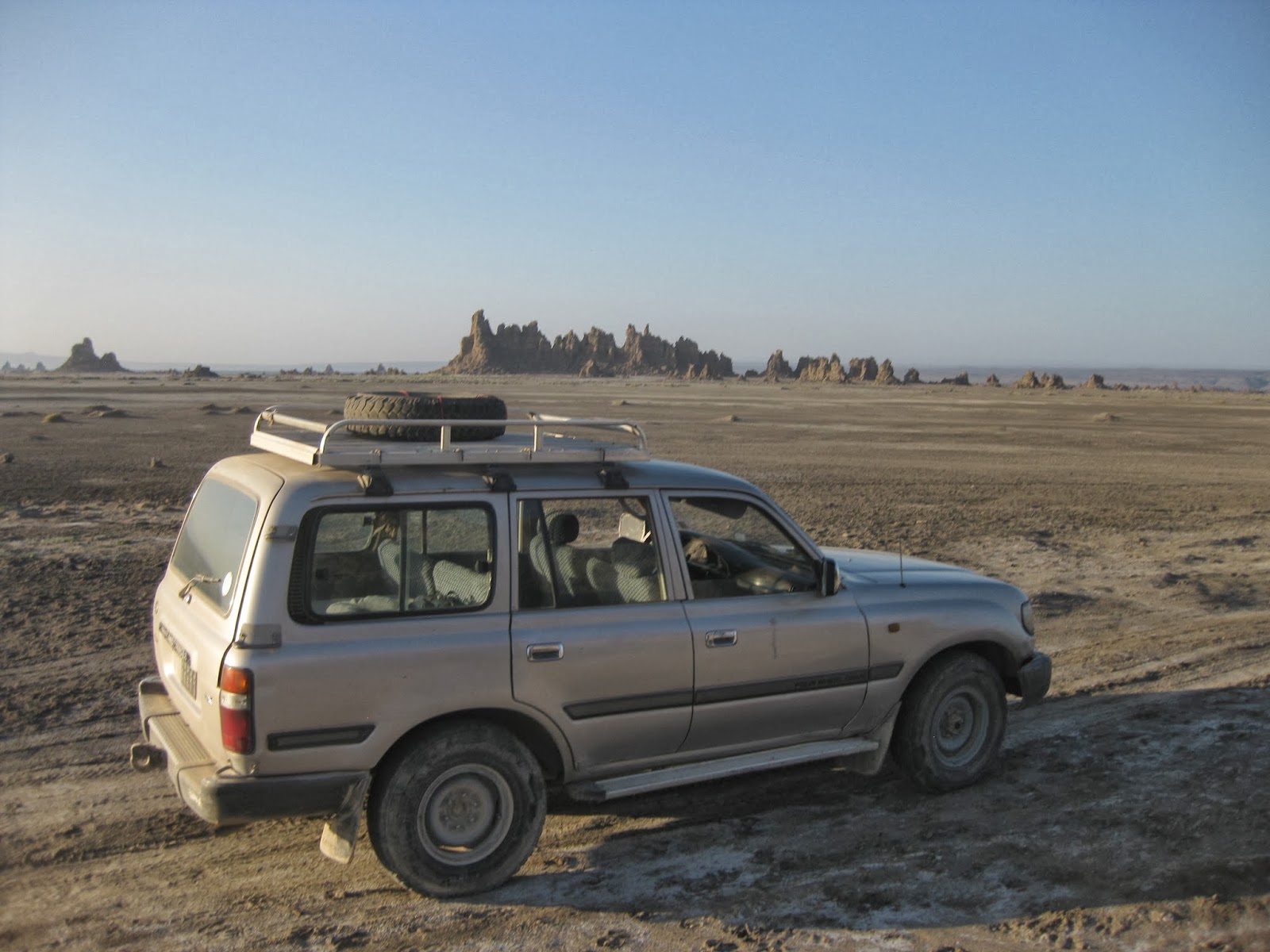 Fortunately our journey on the treacherous roads of Djibouti didn't end like that of the truck below. Whether due to treacherous curves, oppressive weather, the high volume of truck traffic to and from Ethiopia (Djibouti is the land-locked country's main port), or simply lax clean-up standards, truck graveyards were not an uncommon site on the roads of Djibouti: 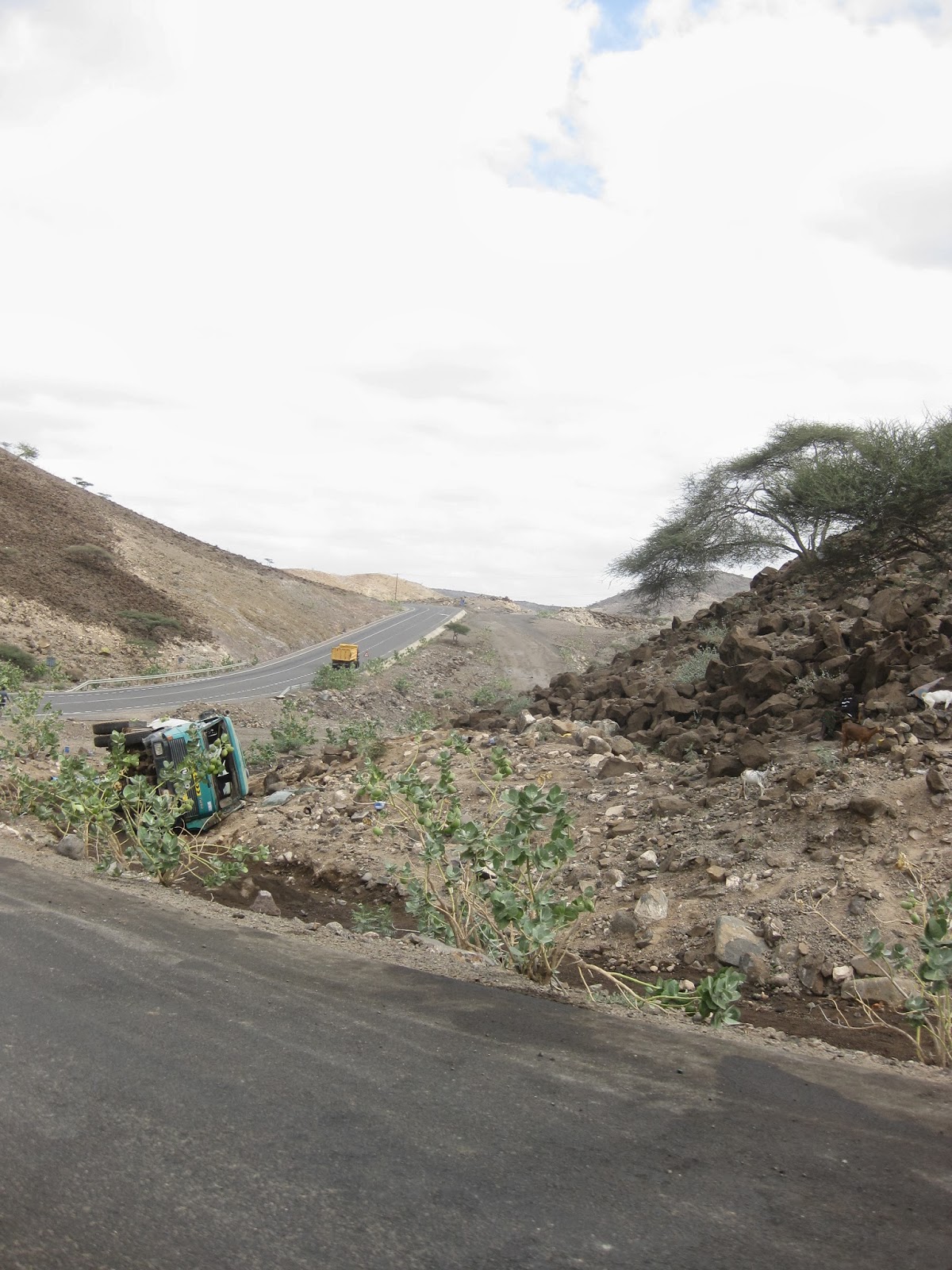 That's all for now...
Posted by MJK